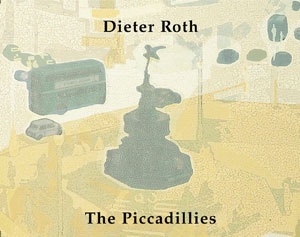 Dieter Roth’s “6 Piccadillies” are among the most celebrated prints of the last fifty years, as iconic as Piccadilly Circus itself. Few people are aware, however, that these prints were part of a larger plan.

Roth had been sending modified postcards to his friends since the 1950s and was captivated by a collection of Piccadilly Circus postcards belonging to his friends Rita Donagh and Richard Hamilton. Blowing up one of the postcards from 1965, he then developed the six prints, using a combination of offset and screen printing. On two occasions, Roth photographically enlarged and overpainted the “Piccadilly,” and it had always been his intention to enlarge all six of the series to create a “Giant Piccadilly Puzzle” with interchangeable elements.

To celebrate the seventy-fifth anniversary of his birth, his longtime friend and publisher, Hansjorg Mayer, has fulfilled Dieter Roth’s ambitious program. 250 color illustrations.