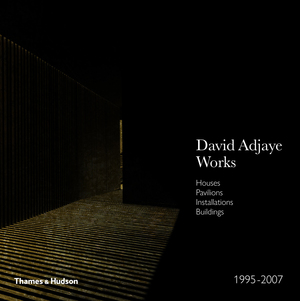 Acclaimed architect David Adjaye is known for his artistic sensitivity and deft use of space and inexpensive, unexpected materials. With the hindsight of almost twenty years of practice and a raft of high-profile projects around the world— perhaps best symbolized by the National Museum for African American History and Culture in Washington, DC—this book looks back on the houses and buildings of his early career.

Adjaye’s early commissions were the test sites for what would become his unique, celebrated, and highly sought-after brand of “critical regionalism.” From London to Brooklyn, in private houses and public buildings, his clever urban interventions abound: roof-level living space is added to a factory-turned-studio, a sunken courtyard encases a tower-like house, and basalt stone extends a basement dining area to a roofless gazebo.

David Adjaye—Works brings together all of these early projects and more and presents them with new analyses and recently uncovered archival material, testifying to the originality of an architect at the height of his talents who is changing the face of our built world.

David Adjaye has offices in London, New York, and Berlin, and his public buildings have brought him international critical acclaim. His previous books are David Adjaye: Houses and David Adjaye: Making Public Buildings.

Peter Allison is a London-based exhibition curator and teacher.