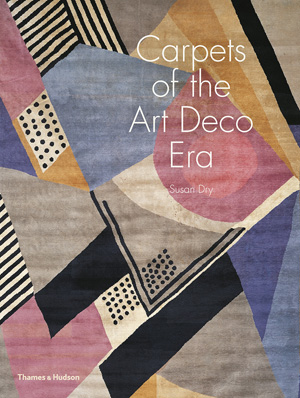 The revolutionary art and design of the early twentieth century produced textiles, particularly carpets, of extraordinary vitality. First the flourishing Art Deco movement spread bold patterns across Europe and America, before giving way to sophisticated Modernist abstractions influenced by Bauhaus, Cubism, and collage. In just a few decades carpet design was transformed into a showcase of the avant-garde, as legendary artists and designers such as Picasso, Poiret, Gray, Delaunay, and Klee created dazzling, influential works of art still valued greatly today.

Beautifully and extensively illustrated, Carpets of the Art Deco Era charts the evolution of carpet design during the period, celebrating the results of a particularly rich era in the decorative arts. An important visual survey for any textile arts shelf, this volume is now available again in a compact, accessible format.

More than a simple catalog of carpets. Readers will enjoy a thorough discussion of art deco and modernism throughout Europe and America in the early 20th century [and] develop a familiarity with the many influential designers and artists of the period. Rich and readable essays [are] accompanied by numerous color and black-and-white images. Recommended without reservation for academic and art libraries.

This thoroughly researched and beautifully designed book is generously illustrated with period black-and-white and color photographs of carpets and interiors, [and examines] handwoven and knotted carpets mirroring the avant-garde art and design movements in the first half of the 20th century Europe, and the debate between the craftsmen and industrialists.

Much more than a simple catalog of carpets designed by major artists of the Art Deco and Modernist period…[A] Beautifully presented as well as seriously researched book.

Susan Day was Chief Librarian at the Institut Français d’Architecture from 1981 to 2004. She has written monographs on architects Louis Süe and Jean-Charles Moreux, published widely on Islamic textiles, and acted as Scientific Advisor for the Louvre and Les Arts Décoratifs museums.