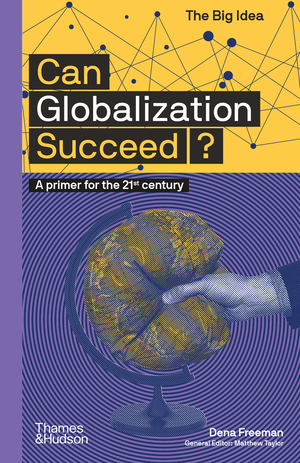 Since the 1980s, the expansion of capitalism and neoliberal ideologies have created international standardization, deregulated free markets, and increased economic integration between countries, making the production of goods increasingly global and interconnected. However, the success of globalization has led to a rise in social and economic inequality, environmental damage, the erosion of democracy, and decreasing variance of cultural expression.

Tracing the development of economic globalization since the first wave of colonization in the sixteenth century, and featuring over 150 color images throughout, Can Globalization Succeed?—the twelfth title in the Big Idea series—examines globalization’s political, economic, and cultural impact on the power of nation-states and on populations worldwide. By exploring why so many people express the feeling of being “citizens of nowhere” rather than “citizens of the world,” author Dena Freeman assesses globalization’s ability to adapt and survive the growing dissatisfaction with the current system. In light of the antiglobalization movement of the 1990s and 2000s—as well as the more recent nationalist backlash led by President Donald Trump and embodied in the 2016 Brexit vote—this book considers whether globalization can survive in a world where international governance is crucial to solving global warming and upholding human rights.

Dena Freeman is a senior visiting fellow at the department of anthropology, London School of Economics. Her work focuses on globalization, development, inequality, religion, and democracy.