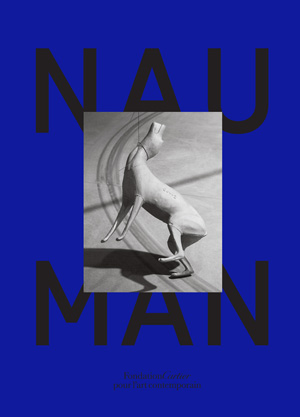 A prolific artist, recognized as one of the most influential of his generation, Bruce Nauman (b. 1941, Fort Wayne, Indiana) has developed an astounding body of work, combining sculpture, video, neon, installation, and performance art, since the late 1960s. Nauman is attached to notions or ideas concerning the body and identity, the function of language, the perception of space, and the participation of spectators. He is also particularly interested in the world of dance—expression through movement. Influenced by his encounter with musician John Cage and choreographer Merce Cunningham, he began producing in 1967 a series of filmed performances in which banal, everyday gestures or simple phrases are repeated methodically. In the 1970s and 1980s, he used neon in his works, playing with words or representing sexual scenes. Nauman’s more recent pieces continue to question the ideas or concepts he has explored since the beginning of his career, adding to an exceptionally rich body of work.

Designed in close collaboration with the artist, and published to coincide with an exhibition at the Fondation Cartier, Bruce Nauman presents photographs, notes, and sketches alongside excellent reproductions of art, all from the last four years, that allow the reader to gain a deeper understanding of a work that defies categorization, in the space between conceptual and minimalist art.

Robert Storr is an artist, critic, and curator.

Joan Simon is an independent curator, writer, and arts administrator based in Paris.