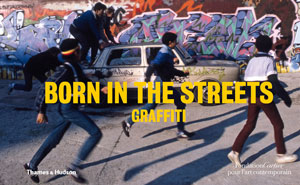 Beginning in July 2009, the Fondation Cartier will be hosting an exhibition that celebrates street art. The show and the accompanying catalogue first reexamine the birth and evolution of the graffiti movement in New York in the early 1970s, and feature documentation from that time, including press clips and photographs of tags and graffiti by artists such as Lee, Seen, and Lady Pink, among others.

The book then explores the explosion of creativity worldwide that followed the New York movement, especially in Paris, which became the nerve center for European graffiti in the 1980s. It juxtaposes the different aesthetics of cities like New York, Paris, London, Berlin, and Sao Paulo, highlighting styles specific to each city and the diverse practices of contemporary artists who began in the graffiti movement. There are interviews with artists who influenced the development of street art and with others, such as gallery owners, who were involved in its evolution.