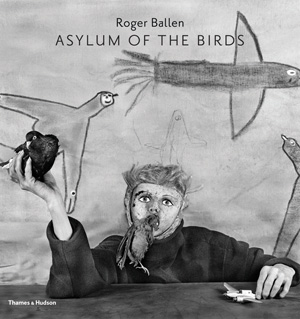 Roger Ballen is one of the most original image makers of the twenty-first century. Asylum of the Birds showcases his iconic photographs, which were all taken entirely within the confines of a house in a Johannesburg suburb, the location of which remains a tightly guarded secret. The inhabitants of the house, both people and animals, and most notably the ever-present birds, are the cast who perform within a sculptural and decorated theatrical interior that the author creates and orchestrates.

The resulting images are compelling and dynamic, existing somewhere between still life and portrait. They are richly layered with graffiti, drawings, animals, and found objects. In a world where photographers seek to avoid definition, Roger Ballen is a true original who not only defies genres, but has defined his own artistic space as well.

The asylum can be either a refuge or a place of madness. In Roger Ballen's new book, Asylum of the Birds, it's both.

Forever inhabiting the darker depths, Ballen's latest subject is an abandoned house in Johannesburg haunted by a cast of quasi-anonymous refuges and a flock of unruly birds.

Combine[s] the fantastical with the unsettling…Ballen's images tap into a tension that for many, like a good rubbernecking, links the distressing with the entrancing.

These images explore that moment or place or brain trick where the hideous becomes the beautiful. It's not that perspective shifts from one to the other but rather that it lingers in the balance of both.

A revelation…Iconography liberated from narratives re-forms itself as wordless poems from the mind of Roger Ballen.

If we're inside the photographer's head, it's a scary place to be. The playful, antic moments in his earlier work are overshadowed by a somber, pessimistic mood—a sense of the world in fragments, spinning out of control.

Ballen straddles the line between photography and image making, and Asylum of the Birds is full of this tension…To look at Ballen's photographs is to enter into some sort of dream state. On first blush, the images seem grotesque, terrifying even, but as they become more familiar, there is a certain fantastic, magical quality, the jumble of the subconscious situated very intentionally by an expert interpreter of our dreams.

Ballen is at play all the time…We read these images as those of a sinister jester wreaking havoc on division of fact and fiction.

Strangeness is the language that photographer Roger Ballen cultivates in his unsettling work.

Ballen sets up scenes that are striking and dramatic…Any collection strong in modern art photography will find this an addition.

Ballen creates a metaphysical world that dances the line between dream and nightmare.

Roger Ballen is one of the most important and distinctive art photographers working today. His previous books include Asylum of the Birds, The Theatre of Apparitions, and Ballenesque: Roger Ballen: A Retrospective.