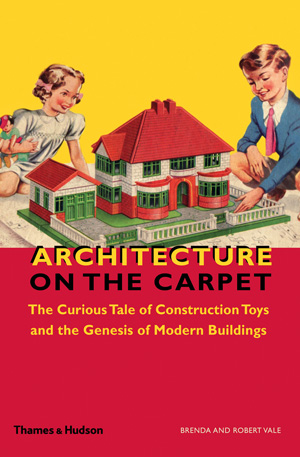 This entertaining book offers a novel view of architecture through the prism of construction toys. Ranging over the last century to the present, Brenda and Robert Vale draw parallels between the model-building sets of the modern period and architectural movements, social history, and national identities and myths. Some children’s construction toys such as Lincoln Logs and Tudor Minibrix have looked to the past. Others have looked to the future: as early as the 1920s, the American metal toy Bilt-E-Z could be used to construct a stepped-back skyscraper like the Empire State Building.

The Vales investigate not only how models sets have reflected different building styles but also whether the toys themselves influenced the careers of the children who grew up playing with them. They explore connections between model-railway buildings and modernism; model sets such as Castos and reinforced concrete housing; and even between the creative but slightly surreal Playplax and postmodern deconstructivist architecture.

Argues that construction toys such as Lego and Meccano not only reflect the architecture of the real world, but influence the way individual architects design.

Explores everything from gender bias to class distinctions of construction toys.

Argues that modern buildings have some roots in construction toys.

The authors’ intensive review of the commercial creation and specifications of the individual toys is truly unique.

Brenda Vale is a professor of architecture at Victoria University in Wellington, New Zealand. Her previous books include The New Autonomous House.

Robert Vale is a professor architecture at Victoria University in Wellington, New Zealand. His previous books include The New Autonomous House.