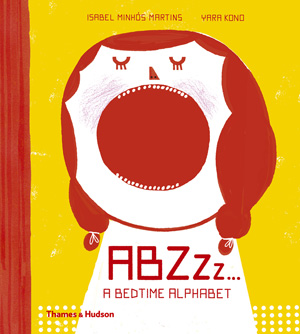 From “A is for Awake” to “Zzzz…” this whimsical interactive ABC book helps children wind down before bed and fall asleep. Prompts to ask one final question, encour-agement to say goodbye to the sun, and details about animals and their sleep habits make this an engaging and useful book that kids will ask for again and again. Each page features a different letter of the alphabet: on some nights kids will make it all the way to “Yaren” where Naru children are beginning their day instead of ending it, while on other nights they will nod off at “Hibernate.” Young readers learn and, more importantly, doze off, making this a particularly covetable title for children and parents alike.

Sleepy children won't make it until the end of this well-conceived and sharply designed alphabet… Angular, screenprintlike graphics in zingy reds, yellows, and blues aren't exactly sleepy, but poring over the details may still quiet some young minds.

This anything-but-boring read will delight little ones and will have them yawning in no time as they practice sounds and letters. The meditative, poetic nature of the text pairs perfectly with the minimalistic, graphical, yet bright and captivating visual elements. Early literacy advocates and children alike will dream sweetly after enjoying this interactive book as a group or as a one-on-one night-time story… Offers proof that getting to sleep doesn't have to be dull.

Isabel Minhós Martins was born in Lisbon, Portugal and graduated from Lisbon College of Fine Arts with a degree in communication design. She founded, with three friends, the publisher Planeta Tangerina