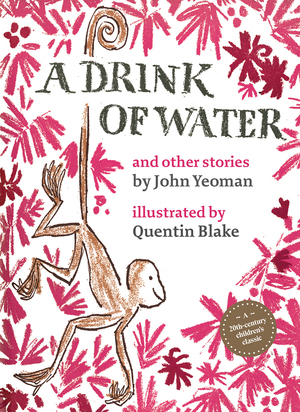 Originally published in 1960, this classic tale from beloved author John Yeoman and renowned illustrator Quentin Blake is a collection of seven charming animal fables. It was the first children’s book published by either John Yeoman or Quentin Blake, who are still producing books in partnership today nearly sixty years later. This facsimile edition reproduces the original publication and features a new foreword by Quentin Blake.

Young readers will adore the observant and logical monkey’s attempts to find a drink of water, as well the entertaining cast of animals featured in each story.

The creative partnership between John Yeoman and Quentin Blake will be the subject of a retrospective exhibition at the House of Illustration in London opening October 6, 2017.

The distinctive, scraggly, energetic lines of ink that we associate with the great Quentin Blake were even scragglier when he was starting out. [His] first published work, in collaboration with the wonderful writer John Yeoman, came out in 1960 and returns to print after a long absence…This collection of animal tales is good for reading aloud and abounds with Mr. Blake's funny, expressive drawings.

John Yeoman was head of English at the French Lyceée in London. His collaboration with Quentin Blake has resulted in a long list of successful children’s books.