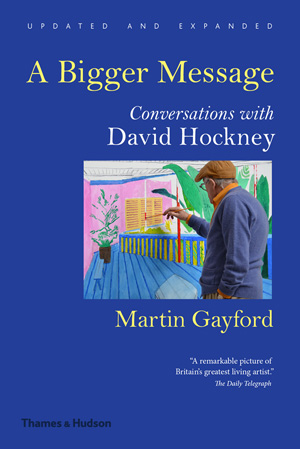 David Hockney’s exuberant work is highly praised and widely celebrated—he is perhaps the world’s most popular living painter. But he is also something else: an incisive and original thinker on art.

This new edition includes a revised introduction and five new chapters which cover Hockney’s production since 2011, including preparations for the Bigger Picture exhibition held at the Royal Academy in 2012 and the making of Hockney’s iPad drawings and plans for the show. A difficult period followed the exhibition’s huge success, marked first by a stroke, which left Hockney unable to speak for a long period, followed by the vandalism of the artist’s Totem tree-trunk, and the tragic suicide of his assistant shortly thereafter. Escaping the gloom, in spring 2013 Hockney moved back to L.A. A few months later, Martin Gayford visited Hockney in the L.A. studio, where the fully-recovered artist was hard at work on his Comédie humaine, a series of full-length portraits painted in the studio.

The conversations between Hockney and Gayford are punctuated by surprising and revealing observations on other artists—Van Gogh, Vermeer, and Picasso among them—and enlivened by shrewd insights into the contrasting social and physical landscapes of Yorkshire, Hockney’s birthplace, and California.