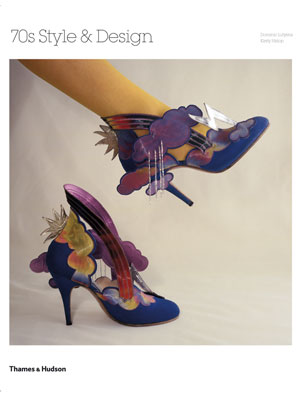 Once dismissed as the decade of foil wallpaper and shag rugs, the 1970s are now being enthusiastically mined for trends from the fashion, music, and literature of the time. The period, which united elements of earlier movements such as Art Deco and Pop, continues to influence today’s tastemakers.

From artist Duggie Fields’s apartment to album covers of New Wavers like the B-52s and glam rock’s David Bowie, from the slick advertising of Italian fashion house Fiorucci to such seminal book covers as Germaine Greer’s The Female Eunuch, the authors have gone beyond the usual discussion of flares and platform shoes to address the design aesthetic of the decade as a whole. Architecture and design collectives of the time, including UK-based Archigram and the avant-garde Italian group Studio Alchimia, are also recognized as important contributors to the look and style of the decade.

70s Style is sure to inspire everyone from dedicated followers of fashion to even the harshest critics of the decade. Hislop and Lutyens have rescued the 1970s from parody and have produced a study that is meticulously researched and sensationally illustrated.

A journey through this iconic era, each page filled with fashion, music, design and literature…. A study that is meticulously researched and wittily written.

Kirsty Hislop is a freelance writer and stylist who has worked for British Elle and The Observer magazine. She also designs for the award-winning card company Umpen Editions. She is based in England.

Dominic Lutyens, a trends and design journalist, has contributed frequently to the Sunday Telegraph, The Guardian, and The Observer. He is based in England.